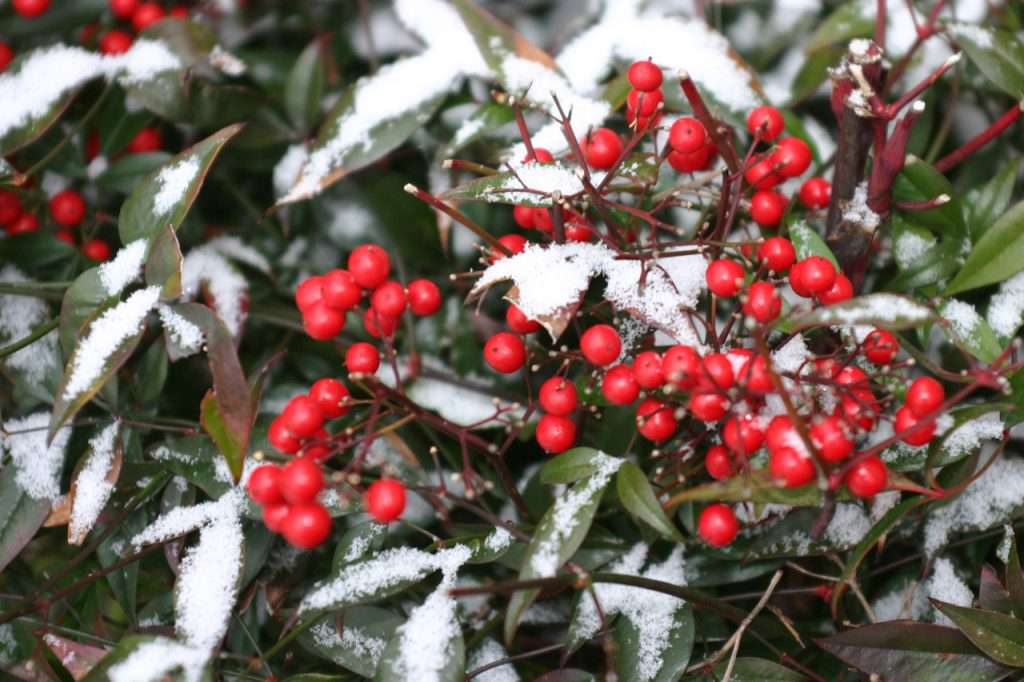 Long Island’s harsh climate is often responsible for severe damage to landscape plants. Winter sun, wind, and cold temperatures can bleach and desiccate evergreen foliage, damage bark, and injure or kill branches, flowerbuds, and roots. Snow and ice can break branches and topple entire trees. Salt used for deicing streets, sidewalks, and parking lots is harmful to landscape plantings. Winter food shortages force rodents and deer to feed on bark, twigs, flowerbuds, and foliage, injuring and sometimes killing trees and shrubs. All is not bleak, however, as landscape plants can be protected to minimize some of this injury.

Sun scald is characterized by elongated, sunken, dried, or cracked areas of dead bark, usually on the south or southwest side of a tree. On cold winter days, the sun can heat up bark to the point where cambial activity is stimulated. When the sun is blocked by a cloud, hill, or building, bark temperature drops rapidly, killing the active tissue.

Young trees, newly planted trees, and thin-barked trees (cherry, crabapple, honey locust, linden, maple, mountain ash, plum) are most susceptible to sun scald. Trees that have been pruned to raise the lower branches, or transplanted from a shady to a sunny location are also sensitive because the lower trunk is no longer shaded. Older trees are less subject to sun scald because the thicker bark can insulate dormant tissue from the sun’s heat ensuring the tissue will remain dormant and cold hardy.

Sun scald can be prevented by wrapping the trunk with a commercial tree wrap, plastic tree guards, or any other light-colored material. The wrap will reflect the sun and keep the bark at a more constant temperature. Put the wrap on in the fall and remove it in the spring after the last frost. Newly planted trees should be wrapped for at least two winters and thin-barked species up to five winters or more.

To repair sun scald damage, cut the dead bark back to live tissue with a sharp knife, following the general shape of the wound, rounding off any sharp corners to facilitate healing (Figure 1). Wrap the trunk in subsequent winters to prevent further damage. Do not use a wound dressing. Spraying the area with a fungicide may help prevent fungal infection of the wound.[/fusion_text][/one_full][/fullwidth]

Let Us Do The Work For You.

Basics Landscaping Co., Inc., a division of Hewlynn Garden Center, has some of the most talented and hardworking people in the business combining their skills and resources to provide you with nothing but the best.

Hewlynn Home & Garden Center is a one stop shop for all of your pool, pond, BBQ, propane, holiday and winter supplies. Hewlynn united with Basics Landscaping in 1998 at our Deer Park Avenue location to expand on the knowledge and services we provide to our clients.

How to Heal Grass Burn

Preparing Your Yard for An Above-ground Pool!

Making Merry in Our Community

8 Ways to Elevate Your Patio